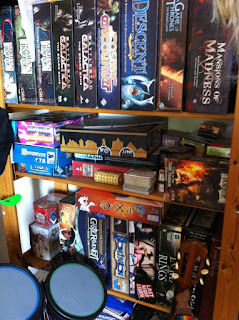 
Hooting into the Abyss is a tabletop gaming blog, but there’s more wargamers and people painting miniatures here than anyone else. I was offered a place here to talk about tabletop games and the last time I painted a miniature I was in my late teens. It was a Warhammer Quest elf, one of the only Games Workshop miniatures I still have, although I’m not sure where it is any more.


As a child, I was given a copy of HeroQuest, which my brother, father and I used to play constantly. It was my first board game, my first look at a primitive version of the Warhammer universe, and the way we played, my first roleplaying game. My brother was too young to see through my father’s lies when he was told that Joyce was a good barbarian name. Then there was Stumpi Shortarse the dwarf, and Gary the National Elf (from the National Elf service). Even in these early years, I discovered there were expansions for the board game and hunted them out eagerly, a warning sign for my stuffed board game shelves two decades later.

My teenage years were dominated by Warhammer, which my brother and I discovered and grew addicted to, visiting the Brighton Games Workshop and spending what little money we had on miniatures which we’d rarely have time, skill or a budget to paint properly. My brother loved the idea of armies fighting each other, but I always preferred the stories of the individuals. Because of that, when Warhammer Quest came out, I fell in love. The game not only was like a more customisable (and more expandable) HeroQuest, but there were scenes between dungeons. Those aspects became longer stories (including the group making friends with a zombie torch-bearer and one of them marrying a monster on a bet). At thirteen I was given a copy of Vampire: The Masquerade and from there became a roleplayer. This December I’ll have been running roleplaying games for 20 years, through three (and a bit) editions of Dungeons & Dragons, two editions of the World of Darkness and a lot of shifts in gaming thought.


Despite my love of making a narrative between adventures in Warhammer Quest, I enjoyed the board game aspects too, and for about a decade now I’ve been a ‘board game person’. Miniatures and Collectible Card Games have both been addictions of mine, but not ones I’ve been able to keep up with. Board games have become a perfect place for me. The games are generally self-contained, not resorting to a ‘who spent the most money wins’ like a lot of CCGs. You don’t have to paint miniatures for a board game, although sometimes that is a nice touch.


So thanks to HeroQuest and Warhammer Quest, I have become a board gamer and roleplayer. My part as a member of Hooting into the Abyss will be to review board, card and roleplaying games, especially with an eye to people who haven’t played these kinds of games so much. Board games are massive, and in a really good place right now. There’s a speech by Quintin Smith about how we are in a golden age of board games and if you don’t believe they can be amazing experiences, just watch the video and tell me you don’t hear something interesting in the games he describes. If you have a soul, it's impossible. They’re all so different and strange and fun. 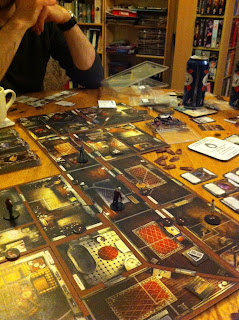 
When I was learning to run RPGs well, I had a couple of mentors who helped. It’s great to have people with gaming knowledge to drop some inspiration on you, and some fun gaming theory. One of my mentors told me that a roleplaying game should be the best film that you won’t see. The players should come out of the game able to imagine the scenario like they were there, eager to share the wonders and the horrors they’ve seen with people. Sure, gamers are rarely actors and a narrator’s not really a director, but the personal involvement of taking part in a collective story allows your imagination to take over and immerse you in the experience.


For those still having problems, there will be explanations in the coming weeks, starting with my favourite RPG of the moment, Fiasco.


A PHOTO OF MY CURRENT LOVES


I’ve been growing into a love of indie roleplaying games lately. As a person who plays a ton of board games and video games, I love when mechanics are elegant and interesting, when the working parts are intricate and encourage certain styles of play. This is why I’ll be looking at a lot of indie RPGs, and forcing my gaming groups through as many of these as possible. 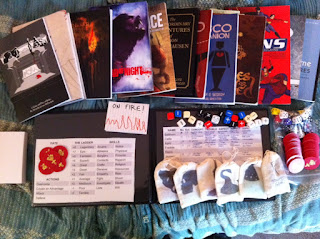 Here are a few of the games I’m hoping to cover, or at least take a brief look at:


* A Tragedy in Five Acts - A Shakespearean tragedy role-playing game.


* Blood & Honour - A samurai game where the players make their clan, their master and then their characters trying to live and die for their honour.


* Curse the Darkness - A post-apocalyptic game where all ideologies are banned on pain of evil-shadowy-monster-death. Will you sacrifice everything to make the world a better place or give up trying to accomplish anything greater than simply survive?


* Durance - A science fiction retelling of the founding of Australia. A prison game where you play both wardens and prisoners trapped on an inhospitable planet in a neglected colony.


* The Extraordinary Adventures of Baron Munchausen - A game to play drunk. It’s less roleplaying and more like Just a Minute about your legendary expeditions and refuting those of your friends. Simply ask another player “Baron VanKampf, tell us of the time you vanquished the Moon Men’s invasion of Belgium using only a fork?” and watch them go!


* Fiasco and Fiasco Companion - A game of people with high ambition and low impulse control. I’ll be covering this one really soon


* Houses of the Blooded - A fantasy game billed as the anti-D&D. Instead of timeless twenty-somethings wandering around lands consequence-free, murdering monsters for coin. In Houses you play a landed noble with a castle, servants, terrible secrets and a family who you might also end up playing as the characters age and die. Not just that, but there’s a compelling world where war is illegal and murder is expected.


* Icons - A super hero game where you make random characters. I used this game to make the characters for my upcoming webcomic (Explosion High! Coming soon!)


* Perfect (Unrevised) - “It’s like Kafka and Charlotte Bronte had children, and those children wrote Blade Runner” That quote by Malcolm Craig says it all.


* Primetime Adventures - Play a television show! Seriously, this is a game of playing a television show, like with fan mail and character spotlights and such. I want to run a game about making a TV show where the players are both the people in the TV show and its creators. Not sure how yet.


There are others, oh so many others, a few as quick examples:


* Monsterhearts - A paranormal romance RPG with a feral side. The cast are at a point their life where they’re not in control of their bodies, in being both teenagers and monsters.


* The Quiet Year - A map-making RPG where you play a community after the apocalypse, with a year to rebuild your community.


* Ribbon Drive - An RPG about a road trip, using mixtapes the players each bring to affect the story.


* Shotgun Diaries - A frenzied zombie game about being able to survive, even in the short term. 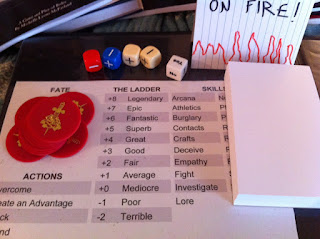 A BRIEF LOOK AT FATE


Rather than simply deliver vague promises of future games I'll review, here’s a quick look at one of my current beloveds to tide you over. The Fate RPG.


Fate Core is a book by Evil Hat who not only have an awesome name, but made a game which uses the narrative itself as rules. The big concept is that rather than try to capture real life and equate it to dice rolls, Fate’s intention is to make something that plays like narrative fiction. For a man who wants to run “the best film you’ve never seen” this is great.


There are three parts to a character; Skills which are simply what you can do and how good you are at them (eg; Wayne Roberts is Superb at Fighting, giving him a +5 in that skill). Aspects which are phrases or keywords relevant to your character and what they do for better or worse (Jaymes has “Zealous Pacifist” as an aspect). Stunts which are little twists to the rules or bumps to specific character abilities (Callie has, “Backstab” allowing her to use Stealth instead of Fighting if her enemy is unaware of her).


Then you have a currency system which are “Fate Points”. If you use an Aspect as a good thing, spend a Fate Point and gain +2 to your dice roll. Someone can use it against you for a +2 as well though, or compel a certain behaviour. If either of those happen, you gain a Fate Point. This makes a simple currency of good and bad behaviour according to your Aspects, which are the things you’re telling all the players are the most important about your character. For instance Jaymes might invoke his Zealous Pacifism to break up a fight. He might have it used against him if he’s trying to fight a person, either to have him question this action or simply be worse at it than his opponent.


It’s a simple system which has already been used for many different types of games. I’ve seen people suggest a Watership Down RPG using Fate, and with these rules it’s just as possible as a western, a sci-fi epic or even a high fantasy game.


The photo at the top of this page shows some of the props I’ve been using in my monthly fantasy RPG which recently converted to Fate.


The dice have +, - or a blank side, are called Fudge or Fate Dice. Four are rolled when you make a skill roll, bumping that ‘Superb’ you have in Fighting up or down, so it could go from Legendary all the way down to Average. There’s also a dice with Yes and No on its side, which is a great arbitrary decision-maker in and out of any RPG.


“On Fire!” is an Aspect. I use cards and thick pens to mark Aspects so that people know what they can Invoke. Things go on fire a lot in my group, so this is a permanent one. That’s why my group can’t have nice things.


The blank Aspect cards are simple ones from Rymans. I was running out and thought that cards without lines would be great as players could draw little pictures, use up as much or as little space as they like. Each of these could end up with; “Scared,” “Naked” or “Thinks that Wayne is watching him” as Aspects to put on characters.


The screen is three linked boards which make a landscape ‘shield’ to hide notes from and customisable to that you can put anything you want on both sides for information. In Fate I keep it flat on the table with a few things listed on it for all to see; the ladder of success & failure, the types of actions you can do, the types of skills there are and a place to put Fate Points. I also have all the players’ names and Aspects on another panel so I can remember how to mess with them.


Fate Core is able to be bought for however much you want to pay (including free) at www.faterpg.com.
Posted by Charlie E/N at 16:00