By Jingo! An Introduction to 'In Her Majesty's Name' by Osprey.

Many moons ago a collection of Warhammer 40k gamers created their own homebrew set of rules called 'In the Emperor's Name' as a way of creating narrative games in the 40k universe. It was played in a skirmish scale and covered a multitude of troop types including those long abandoned by GW. It allowed for flavourful games and even covered action on abandoned floating space hulks as well as more traditional battlefield settings. The game has garnered a community of players, playtesters and game designers through the 'Forge of War Development Group' and the game, now in its third edition, can be obtained free and legally here: http://iten-game.org/ . Although the game I am looking at in this article has moved far beyond its ITEN origins it is worth mentioning as the hobbyist approach runs right through this new product.

One of the original authors of ITEN is Craig Cartmell. He was approached by the good people at Osprey Publishing to write a Steampunk skirmish game for their burgeoning range of wargames rules. The outcome of which is 'In Her Majesty's Name' a skirmish game that pits adventuring companies of Victorians armed with suitably outlandish weapons (as well as more familiar period weapons that can still be just as deadly) against each other in a wide range of scenario types and settings. The list of antagonists run from the humble Metropolitan Bobbie (armed with the English electric truncheon!) to re-animated, mummified Egyptian priests, abominable Yetis, fiendish magic users and a certain consulting detective... 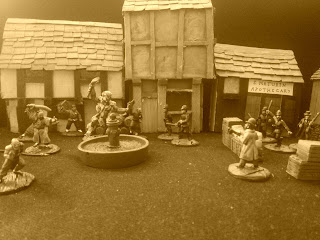 Figures act individually in rotation in each phase of the game (of which there are three: moving, fighting and shooting) and the play order is determined by initiative rolls influenced by the Company's leadership. This ensures both players are fully involved at all times as the tactical situation can alter at any time. Terrain can be interacted with and can have a bearing on the play, if you are fighting inside a dirigible or in a foundry there are dangers other than your opponents! One of the most important characteristics, and one that will have a major bearing on the game,  is your Hero's 'Pluck'. As the author himself says: "This combination of raw courage and intestinal fortitude can be the difference between fame and ignominy."

For those of you who are only familiar with the big, popular games by companies like GW, Privateer Press etc. there are a number of shocking things about IHMN. Firstly, the game has been designed to allow people to use figures from any range they so wish. There are simple points calculations that allow you to design all manner of protagonists. There is an associated miniatures line created by Northstar Military Figures  but the rules are compatible with anything you really want them to be. Secondly the game is cheap. The rulebook is small (although fully packed) and comes to a little over a tenner. The pre-made companies from Northstar are under 30 pounds each. This is a game that does not require significant outlay to get into.

What shines through for me from reading the rulebook is the love of the period, as well as of gaming in general, that the authors have brought to the table here. Although billed as Steampunk it is really Victorian sci-fi (something Cartmell has acknowledged freely) that is the setting here. The worlds of Jules Verne and Edgar Rice Burroughs. Of John Carter of Mars, Flashman and Sherlock Holmes. Its an incredibly evocative period and the rules capture it perfectly without getting too bogged down in minutia. This is a game you can pick up in a single session. It has nice straightforward mechanics that allow for a decent amount of tactical depth but that wont slow you down as you search for the right table or stat sheet. I haven't yet played the game but I am confident I could do so without having to rely on the rulebook too much. I am busily painting up some of the Companies and as soon as I have my first game I will report back here. 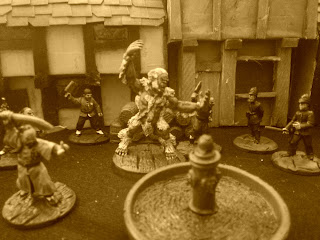 The game has already picked up a loyal following and there are some stupendously good homemade adventuring companies dotted around the internet. Check out the wordpress site to find out more: http://inhermajestysname.wordpress.com/

In Her Majesty's Name is out now.