From my own experience of trawling the web for a nice easy way to make a Female 40K Eldar Farseer, I know that there’s no shortage of people out there looking for ideas or inspiration.

Unfortunately, until recently, most of the suggested ways to build your very own lady psyker have involved a great deal of green stuff work, or resulted in something that didn't really look like a Farseer. Suggestions such as putting a Farseer head on to a Howling Banshee body and green stuffing on a cloak for instance, might sort of work to portray your intent, but I've never felt like they really look the part.

I had a Recent visit from my muse whilst looking at the new plastic Farseer sprue on-line to see how easy it would be to do a weapon swap. I noticed that the chest piece was separate, and to me at least, swapping it out for a female Guardian chest plate looked pretty simple.

Here’s a snap of the sprue for reference: 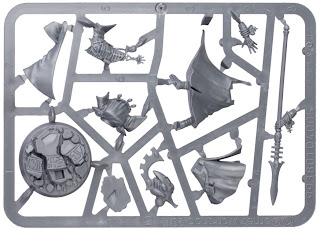 Needless to say I rushed to my local GW this morning to grab a Farseer and begin a critical operation.

I wish I could say that no Eldar were harmed in the making of this Farseer, but alas, I had no spare female Guardian chest plates thus a suitable donor had to be found.  So apologies for the already painted chest plate I've used here: 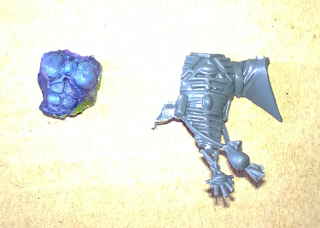 The first step for me was to cut off the sleeve and belt to give me a template to use to cut and file the new chest down to the right size: 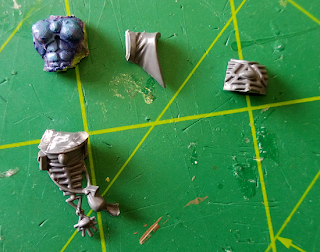 During this delicate operation I found myself holding out my arm and exclaiming “Scalpel!”, It didn’t work though and I had to pick the craft knife up for myself, scandalous I know.

As you can see the new chest is much bigger than the one it's replacing (stop sniggering children) so it needs cutting down to size, what I found useful was to glue the right cloak arm to the body of the Farseer like this: 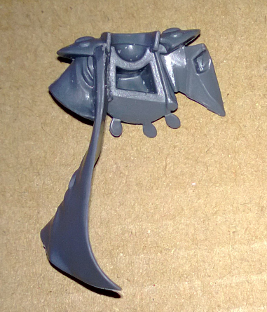 And then work on matching the Guardian’s neck up to the Farseer’s, The indent where the head will go will eventually line up perfectly, however you will have to file off part of the right breast to achieve it. don’t worry, the cloak sticks out far enough to look as though it’s just sitting on top.

You also need to cut of the bottom two sets of “Abs” and then file it at a slight angle sloping down from right to left. 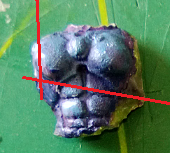 You’ll probably find you are trying to get to something like that, but I wouldn’t take my word for it and cut all that off straight away, take it slow and keep checking the fit.

When I got close to the right size I glued the left cloak parts on too to really make sure the everything was nice and flush: 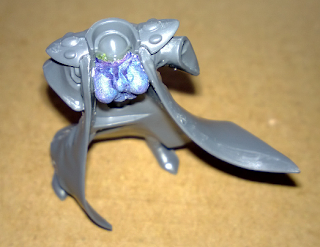 Once the edges were lined up I had to do some shaving on the belt to get it all to fit. There’s actually a nubbin on the belt that slots into the back of the cloak so it’s easy to line up.

Then some glue and a bit of force to hold it all together while it dried. 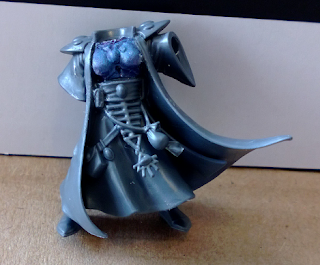 For many people that’s pretty much job done now, you can assemble the Farseer as normal and will end up with something looking very much like this: 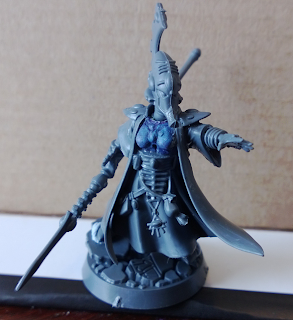 Obviously you will be getting shot of the mold lines and cleaning her up, but you don’t need me to tell you how to do that.

Stage 2: Head, but not shoulders, above the rest

Not being happy with my Farseer still pretty much looking like every other male Farseer out there (only now with breasticles), I set about my normal task of raiding my bits box for ideas to use to set her apart from the rest.

One of my more exciting finds in the box of pointy wonders was the Dark Elf sprue that comes with the WHFB plastic dragon kit, I got the dragon to go with my Lizardmen when Storms of Magic was released and I’d forgotten I had it. On that sprue was this beauty: 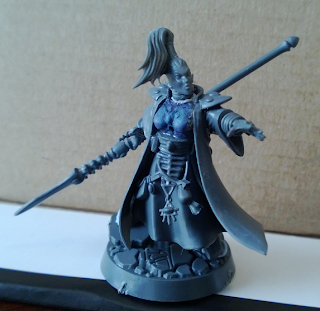 With this simple head swap I was starting to feel like my princess was blossoming into a powerful queen. Possibly the queen of my heart.

Attaching the head proved troublesome though as the dark elf head serves as the socket part of the joint, and so too does the neck recess on the Farseer: 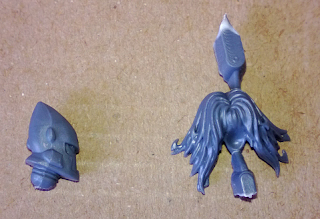 My solution was to take my craft knife, slice the neck off a Guardian helmet and glue it into the Dark Elf neck socket, so the the ball was facing down, it doesn't look like it will work, but it’s quite effective if you line it up right.

Yes, yes, it's poor sub-title I know, but think yourself lucky I didn't use that song as a pun for stage 1....

The next thing I needed to change with my Farseer was her base. Don’t get me wrong, the new GW plastics character clam packs all come with really great looking bases, and the Farseer is no exception. The problem with them though, is that they are all identical, and do we not decorate our characters' bases to set them apart?

Having every plastic Farseer in existence standing on the exact same bit of ruin doesn't really sit right with me, this feeling is worsened still when there’s more than one of the same base on the same battlefield. Yucky.

The upshot is that her base had to go, I decided to keep her left arm as is though so after stage 3 she looked like this: 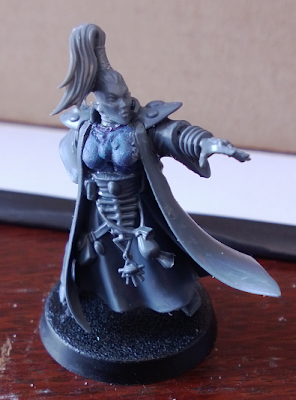 Now for her weapon arm, for which I had found a few alternatives during my expedition into the bitz box :

A: Jetbike Autarch sword arm, it’s metal, and not as pretty as B so ruled it out.

B: Finecast Howling Banshee Exarch’s mirror sword. This looked easy to cut to size and could be interesting on the model.

C: The Flaming sword from the WHFB Empire Wizards kit. I was quick to grab this when I stumbled across it in my search because it reminded me that there’s a wargear option for a flaming sword in the new codex.

D: Dire Avenger Exarch power weapon. Probably not useful as a whole but I wanted it for the hilt, see later.

E: The Singing Spear supplied with the Farseer. I never take the Singing Spear in my army lists, I don’t really intend for the Farseer to be in situations where the st9 shot would be useful so the 5 points get used up elsewhere. I've included it in the picture for comparison as you can see the arm is fairly stunty so everything else needs cutting down to match.

As I mentioned I wanted part D for the hilt, with which I intended to mount the flaming sword so I cut it all down to fit the model and added a little pin to help secure the blade: 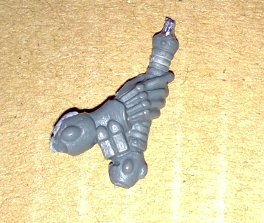 Then attached the blade: 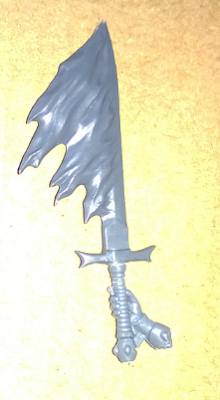 And finally tried a few blu-tac poses on the model until I found one I liked: 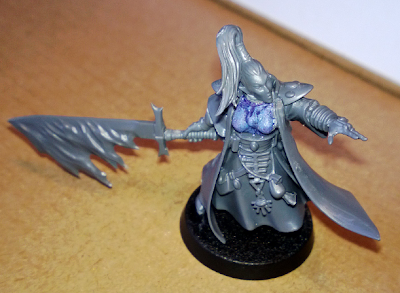 I have some issues with this, the sword is probably too large and unwieldy for an eldar sword, and the guard doesn't really look ornate enough, BUT for some reason I think it still really works. The fluff around the Firesabre, the fact that it gives +1 strength, and sets thing alight sort of makes this look appropriate. And the pose of the model makes it look to me like she’s swinging the sword up towards the target lined up with her other hand.

I’d never be able to paint the sword though and I don’t have a list yet with the Flamesabre in, so I needed to explore my other option a bit more.

There wasn't much work involved in cutting the mirror sword down to size and cleaning it up but this is the result:

And some shots of the sword in it’s place: 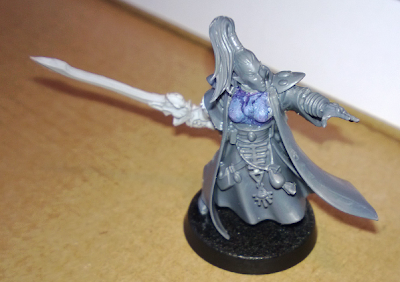 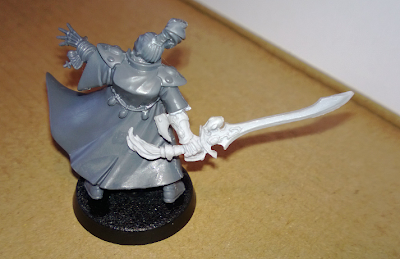 I like the way that the pelt on the Pommel follows the flow of the cloak, I really like the arm blade/guard part and it just looks much more light and Eldary.

I’ll probably go with this option, and when people ask me : “Why does she have a Howling Banshee sword?”,
“Well,” I shall tell them, “she used to be one, an Exarch in fact. A natural born leader whose powerful psychic ability was late in its manifestation, but no less brutal in its execution. She, of course,  had her witchblade modified to match the specifications she was more comfortable with, and to serve as a reminder of her time spent as an Aspect Warrior.”