Initially I hadn't planned to include any Dire Avengers, or indeed Aspect Warriors of any sort, in my Eldar army. I like the concept behind them (Eldar picking a job they like, like shooting missile launchers or being a ninja, and getting really good at it) but some of the models are a mite ropey and on the whole they didn't fit my bike-focused plan.


However, after a painting frenzy that saw the next 5 jetbikes painted in a weekend, no good ideas for converting an Autarch and no Barracuda cockpit, I had a look through my bits box and found a complete sprue of Dire Avengers. Five guys, perfect for assembling and painting to fill the time. While tidying up I also found a box of Necrons, and that was probably where it all went wrong. I asked about at my club to try and get shot of the Necrons and someone offered to swap them for some Dire Avengers, which would give me enough for a full size unit. It was a good deal.

What I wanted to avoid, though, was Aspect Warriors that didn't fit my colour scheme. If I wanted to stick to red, white and black that limited me to Warp Spiders, Howling Banshees and Dark Reapers. As a result, I threw the background out the window and painted them how I wanted.

I've now built four out of ten of them, and so it's time for the third part of my Tale challenge. The model in question here is the unit Exarch, so he has a lot more jewels and fiddly bits to paint than the rank-and-file 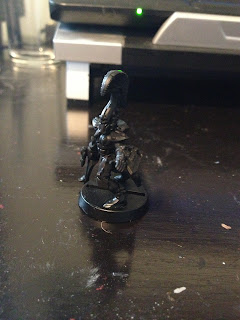 I started from a black undercoat.

Step 1 was paint the red parts - on these models this was the helmet, gloves and shoulder armour. As with the jetbikes, I used Khorne Red. 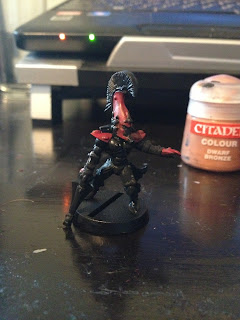 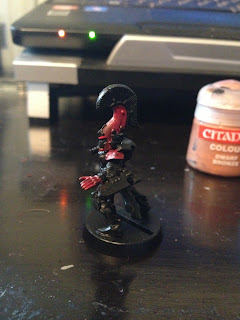 I'd noticed while painting the regular Avengers that they had snazzy cuffs and cufflinks on their armour, and so to draw attention to them and add a bit of contrast I painted the wrists, spurs and faceplate Rakarth Flesh. 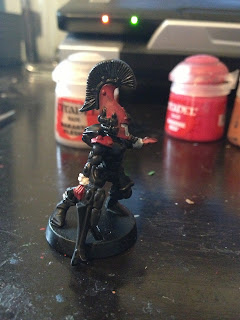 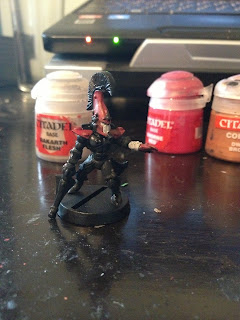 Once those colours had dried, I added detail in Dwarf Bronze - cufflinks, buttons, the pharaoh beard thing on the helmet and the pipes on the cheeks, among other bits. 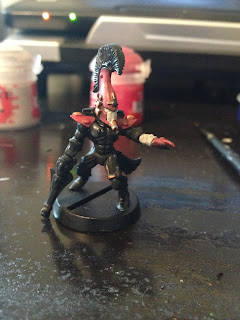 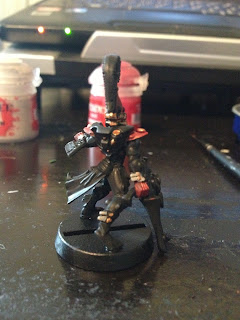 The remaining metal parts - the gun, wrist shield and the frame around the helmet plume - were next to be painted. The gun was done in Warplock Bronze and the rest in Ironbreaker. 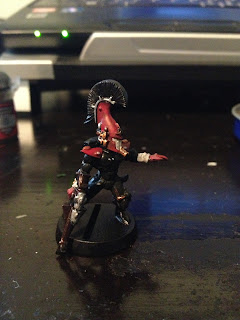 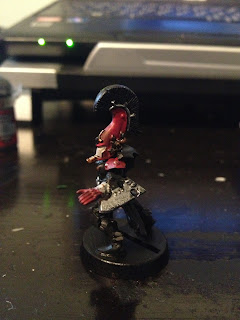 The gems and buttons on the armour, and the lenses on the scope, were painted Goblin Green. 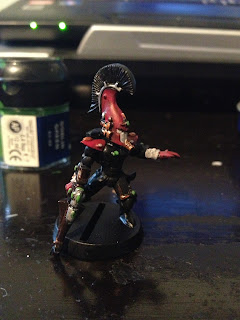 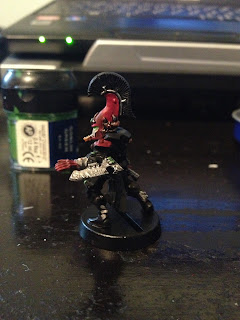 With that, all that was left was the plume and sash. Since these Dire Avengers aren't showing their Aspect colour I tied them into the usual scheme with a navy blue sash (using Kantor Blue) while using the full rainbow of hair colours for the plumes. The Exarch thus got his barnet dyed bright pink courtesy of a 1:1 mix of Mephiston Red and Rakarth Flesh. 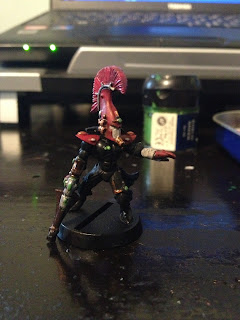 The final step was to give all the armour a good coat of gloss varnish for that alien plasticky look that I want to get across my Eldar. I used GW Ardcoat. 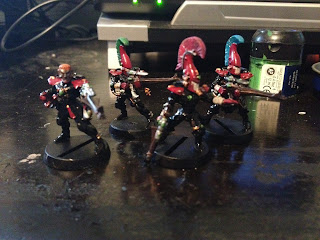 The sword-wielding Avenger on the left is a simple part-swap, using a Wood Elf arm that was originally drawing a bow to look like he's about to draw his sword. 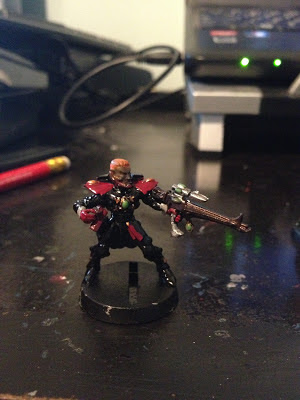