Dystopian Wars is a game I dearly love, with visually interesting models and a great theme - its factions span the usual world powers that one would expect from a steampunk game (with some unusual additions like Australia, Canada, Poland and Belgium among others) but also include among their number the Covenant of Antarctica - possibly the most interesting in flavour terms. Within the setting, they represent an alliance of scientists who initially discovered the super-technology that started the world war, and now try to make amends by waging a campaign against everyone else - fighting to try and restore peace. It's a fairly standard kind of sci-fi set up but one which stands out in a game that's mostly alternate history.

In game terms, the Antarcticans are supposed to be the most advanced faction, shown by their use of force fields on most ships, teleporters, laser weapons and "Particle Accelerators" which function in-game as railguns that can penetrate multiple targets with a single shot. The designs are aesthetically much less industrial than most, with Bioshock-esque art nouveau stylings and a heavy reliance on submarine-like designs. As a result I wanted a much more showy and extravagant colour scheme - my other two fleets were more utilitarian or militaristic. For my Russian fleet I had picked blue-grey with gold detailing as a kind of midway point between ostentation and function, while for the Japanese ships I had dark green with silver detailing heavily washed with black ink to look greasy and weathered. 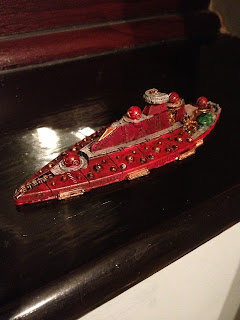 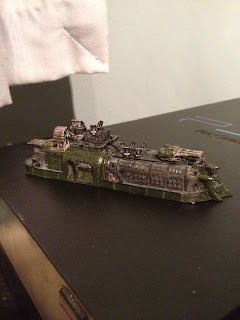 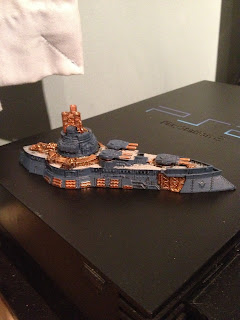 Antarctica needed to stand out even over the Russians - I could imagine a fleet intended to cause terror and force others into submission completely eschewing camoflauge (what's the point of disguising a ship that can hide underwater, fly, teleport or if all else fails use a forcefield?) - and so I went with red, white and gold.

I'd bought the first parts of the fleet - some cruisers, corvettes and a battleship - a while ago, and then put the idea on hold. Now I've returned to the game and am expanding my Antarcticans. My latest purchases have been some destroyers (as yet unpainted), some light airships and a unit of "Support Cruisers" - heavy vessels armed with giant laser cannons and reflectors to increase their power. It is the latter of these that is the focus of this piece - they're really detailed models that gave me the opportunity to modify my unifying scheme a little. 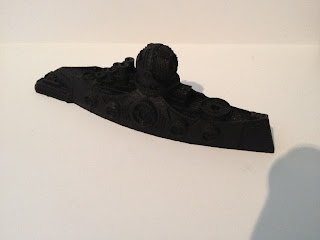 I began with a black undercoat - most Dystopian Wars models are made of a kind of resin, with metal or resin turrets. 90% of the time this is great and doesn't even need washing. The other 10% of the time (as happened with some of my Japanese cruisers) it won't hold primer and the paint flakes off in massive chunks unless you varnish it. 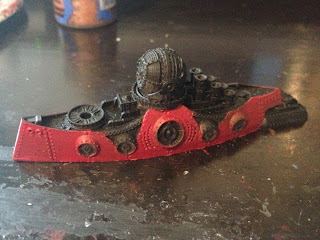 The first proper painting step was two thin layers of Khorne Red on the main hull - I left the secondary turret unglued at this point (the primary turret is sculpted onto the model). I also left the engine (which looks like a hydrodynamic screw in keeping with the Antarctican submarine theme) and broadside lasers unpainted. 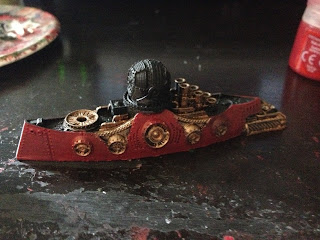 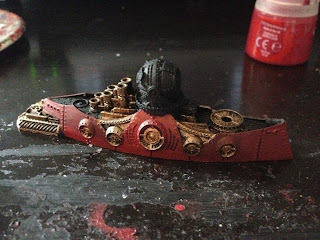 When the red was dry I painted the propellers, turret mounting, funnels and broadside gun mounts with Hashut Copper. 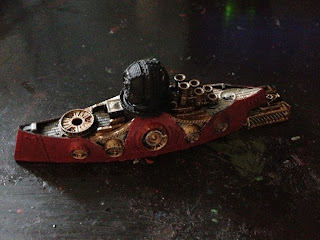 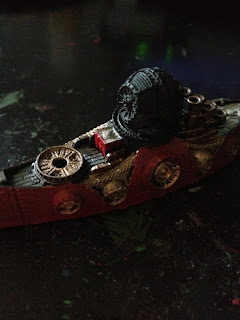 All that remained was to paint the deck, for which I used Rakarth Flesh to give an off-white colour that went well with the red. I also painted the small bridge underneath the main turret red at this point. 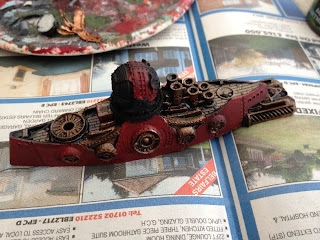 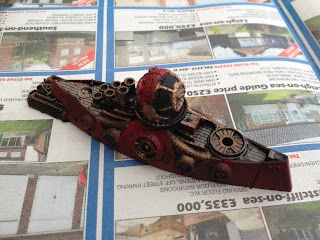 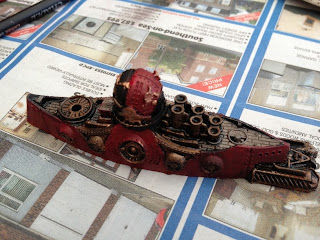 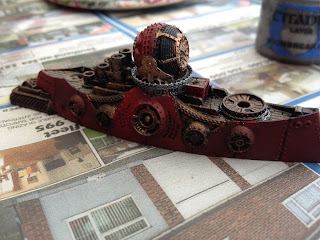 At this point I also applied a series of washes to the ship - the red parts were painted with Carroburg Crimson and the gold and cream with Agrax Earthshade. Dystopian Wars models have a lot of fine detail which washing brings out very quickly. 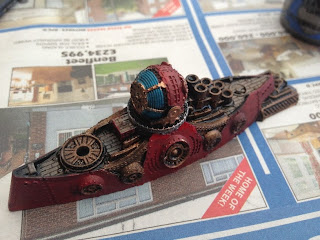 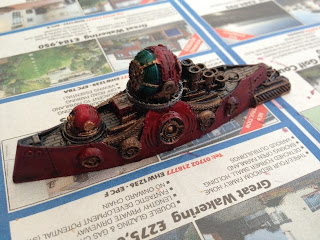 Finally, I painted the coils on the turret - a basecoat of Hawk Turquoise was coated with a wash of Biel-Tan Green. I have continued this theme across all the turbines and coils on my fleet - it is a simple way of adding a kind of glow effect. 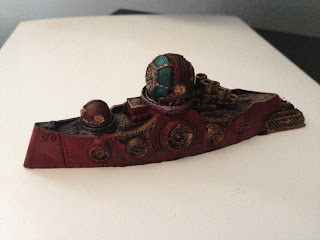 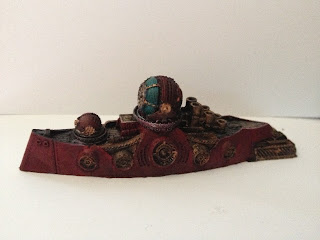 My next Dystopian Wars update will be when my latest purchase arrives - a Chinese detachment to accompany my Japanese into war.
Posted by Ray Webster at 10:00