My next update was going to be about how I painted my Wraithguard, thus bringing my Eldar army up to 1,500 points. I blame Wayland Games for it not being about this.

Mid last week I received an email saying "All Heavy Gear models 50% Off!", with exciting pictures of giant robots. I read a little about it and saw impressive rules for a skirmish-type combined arms game, and my mind was filled with images of little mechs zipping about between trees, tanks blasting holes in the scenery, infantry lining up missile launchers - a sci-fi Call of Duty smorgasbord of tactical jargon and explosions.

Then I saw the bit where it said "contains 6 pewter miniatures" and posted something on the Hangout to the tune of "Big heavy metal models? F*** that!" - I remembered playing Warmachine and swearing at idiotically small contact points and unbalanced models that would fall off terrain and spew limbs everywhere. Nevertheless, since there had been rumblings at my local wargaming club along the lines of "are there games not called Warhammer?", and I'd already convinced people to buy lots of little resin ships to play Dystopian Wars, I thought I'd post something about it on Facebook. By the end of the day I'd decided to buy a starter box and split it with a friend. By the time I went to bed I'd ordered another two units.

Come Friday, I had a large parcel awaiting me - it had arrived! After properly immersing myself in robots by going to see Pacific Rim I got home and opened the box expecting great things. Now bear in mind everything said it was a "1/144 scale mecha wargame." 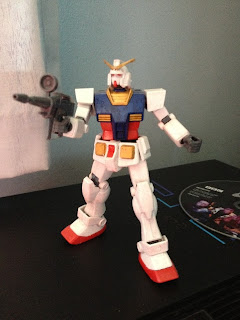 This is a 1/144 mecha kit I bought a while back. It stands about 6" tall, slightly shorter than a Riptide. It is articulated, and all told was quite fun to build (except painting a lot of white before GW released their new range of paints). For reference there's a 1:1 version in a park in Japan and it stands about as high as a building. 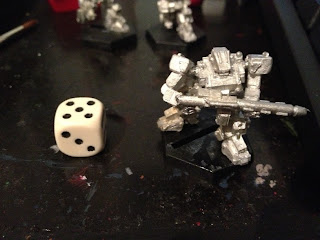 This is a 1/144 Heavy Gear model. For size comparison, that is the small D6 that you get in the GW dice cube. These giant robots are rather dwarfed by Space Marines. This game, it seems, is more like Epic 40,000.

Nevertheless, I pressed on. I had a colour scheme in mind inspired by the SF series Dream Pod 9, the game's makers, had so clearly been inspired by. That was the 1980s cartoon Armoured Trooper VOTOMS:

It had all the ingredients of Heavy Gear that appealed - lots of explosions, skate-boosting mechs and so on. To keep it brief, the story focuses to some extent on an elite military force called the Red Shoulders, whose machines tend to be olive drab with one red shoulder-guard. This seemed ideal - a simple colour scheme to get the hang of on models much finer than I was used to working with. I also had a lot of olive paint left over from my grey-and-green Tau army. 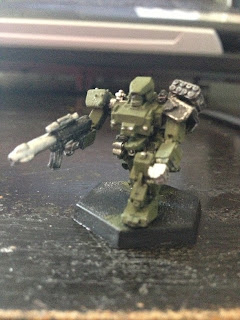 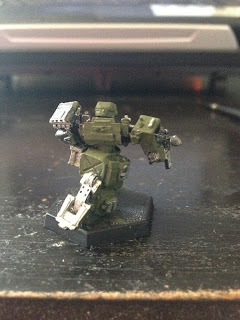 I began with a simple coat of Vallejo Model Colour 70890 Reflective Green to all the armoured areas, and GW Ironbreaker to the metal parts (joints, antennae, gun-barrels etc). 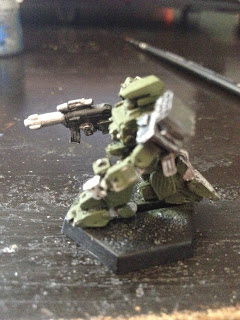 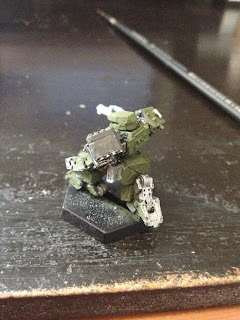 The gun's "body" and the main part of the box missile launcher I kept neutral, using GW Skavenblight Dinge. 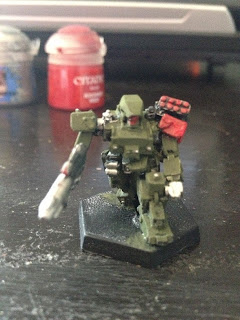 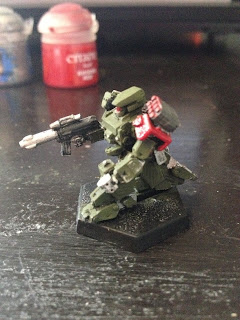 All that then remained was the red shoulder that would give the unit its name. I used GW Khorne Red, and at the same time picked out the missile tips, gunsight and visor. 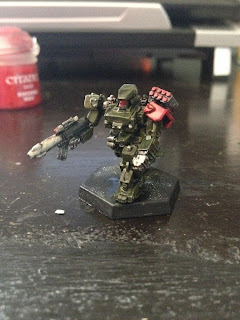 Finally, since the model had a good number of panel lines and fine details, I gave it a good wash of Nuln Oil to get into all the crevasses. A very simple colour scheme but one that I think looks quite good! 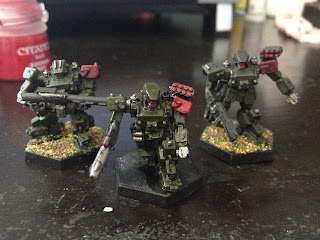 The completed first unit of the Red Shoulders Division - two Hunter-class gears, one with a Snub Cannon, and one Headhunter-class officer's gear with a Medium Autocannon.