See the pudding there, chocolate glistening…ice cream…whipped cream…sprinkles…a moment on the lips a lifetime on the hips. You want it, but you cannot have it. 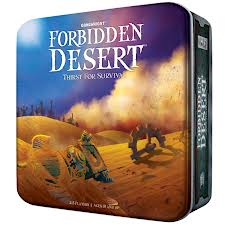 Yes, this is Gamewright’s ‘Forbidden Dessert’, a game about indulgent puddings.


Of course not. ‘Forbidden Desert’ is the follow up to ‘Forbidden Island’ the co-operative board game that could be disingenuously described as ‘Pandemic-lite’. In that game a team of explorers were attempting to find fabulous artefacts of a drowning civilisation before the flood waters closed over the city for good. Simplistic enough that a whole family could enjoy it from children to Granny, but with a fiendish (adjustable) difficulty that meant it could also have a lot to offer the hardcore gamer. 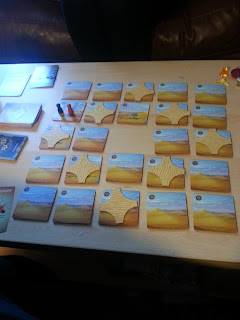 A 2-player game at set up

In this follow up you are part of a team of explorers (again) who have been stranded on the site of an ancient city that is gradually being buried under the shifting desert each with different skills sets who must work together to find pieces of a Da Vinci-esque flying machine to escape the drifting sand dunes.

What the game designers have cleverly done is take the mechanics of Island and changed them in a way that both reflects the different setting, and imparts a greater depth to the gameplay. Instead of collecting cards to obtain the artefacts (which worked similarly to the cure mechanic from Pandemic) flipping tiles will reveal one of two clues that lead to the location of each piece. The difficulty has been ramped up by the added consideration of each characters water supply. You can top these up at wells or with one of the special pieces of equipment you can find, as well as hide in the tunnel systems that bisect the ancient city, but your water supply is always a very real consideration and one that you must manage if you are going to beat the game. 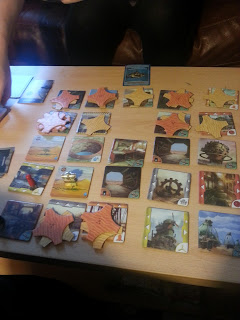 The Sandstorm in full swing...will we escape?


Whereas in Island the water levels would rise and tiles would become flooded, the ever present danger in the Desert is the swirling sand storm that moves around the board throughout the game, dumping ever increasing mounds of sand on the tiles. After a certain point tiles become impassable and require clearing to both be excavated and navigated, again this is another matter to be managed carefully as players can get cut off, or submerged, or you can find that crucial machine part buried under piles of sand as all the while the sun beats down…

Forbidden Desert will feel familiar to anyone who has played Island (or Pandemic for that matter) and has the same strengths as its sister game. Beautiful artwork on the tiles, a strong theme and simple but fiendish mechanics. It is also unforgiving and can take a few plays before you survive it. It is a lot of fun and very engaging. There is the constant threat of both thirst and the increasing sand pile, rarely has such a simple game felt so tense. It works well with two people, although three or four is probably the best amount, and due to the random nature of set up plays differently each time. It is also a quick game, with games typically lasting between 30-45 minutes. As with Island it is also very well priced considering the quality of the components. 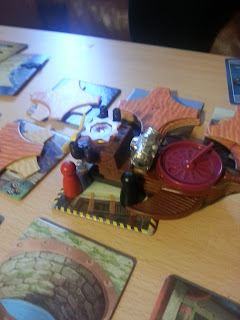 Flying machine constructed, and off we fly to escape the Forbidden Desert

As this is a review it is customary to give a rating. This is an excellent game and one that should appeal to families wanting something to play at Christmas or on Sunday afternoons, or to more ‘serious’ gamers who want a quick game to play inbetween more meaty fare. It also acts as a brilliant gateway to co-operative games. As such I would normally give it a 4, but given the price and replay value for me this is 5 out of 5 Sandunes.
Posted by James at 07:25