For the past few years I've exclusively played Blood Bowl.  I've looked at other games occasionally - sidelong, flirtatious glances where I've given them the once over - but nothing has ever really grabbed me.  A lot of it, I'll be honest, is down to having to learn a whole new set of rules and at my age that's never a good thing.  Learning stuff is for young kids and I'm old enough now where I tend to forget more than I take in.  I've also listened to several friends discussing army lists and the various characteristics of their chosen units.  It left me cold.  Numbers and acronyms thrown around like confetti and utterly, utterly impenetrable.  No, it wasn't for me.

I bought the rulebook for Malifaux.  I know a guy who plays it.  I say plays it, I understand he was once ranked at no.1 in the UK tournament scene so he didn't so much play the game as become the game but that's by-the-by.  He would always evangelise about the game and his enthusiasm encouraged me to look into it.  The models were great and, unlike Warhammer 40k or Fantasy Battle, you didn't need a lot of them.  So far, so good.  Then I read the rules.  Well, stared at the words on the page with mute incomprehension.  I'm sure in reality it's really quite simple.  Unfortunately, so am I and I just couldn't grasp it.  I suppose I could have tried harder but I'm quite busy and didn't really want to devote my time to it.  No, it wasn't for me.

Then, I started reading up about the X-Wing Miniatures game by Fantasy Flight.  Great looking models; Star Wars space ships; pre-painted models; Star Wars space ships; simple, easy to learn rules; and, if I haven't mentioned it, Star Wars space ships.  I remember going to the cinema with my Dad when Star Wars: A New Hope came out in '77 and I was blown away.  I was 7 years old and that film was the stuff of dreams.  Now I had the chance to play a tabletop miniatures game with some of the iconic ships from those films.  I'm a sucker for stuff like that and the big kid/geek in me kicked in and I quickly ordered the core game set.

The core set came with 2 Tie Fighters and an X-wing as well as all the other stuff you need to play the game.  I played a few games using the basic, 'Quick Start' rules against my son (he beat me) and they worked really well.  Certainly well enough too hook me in and I soon bought another core set as well as Tie Fighter, Tie Advanced, X-Wing, Slave 1 and Millenium Falcon expansion sets.  From the outset I wanted to really develop my Imperial force - Yeah, Han & Chewie were cool, Leia was a babe, Luke was....., well, there was Luke, but I wanted to play as the Empire.  I bought the Tie Advanced just so I could take Darth Vader into battle.  I don't care if he plays well or not (I suspect he does but that's not what prompted me to take him) I just wanted to have him in my force. 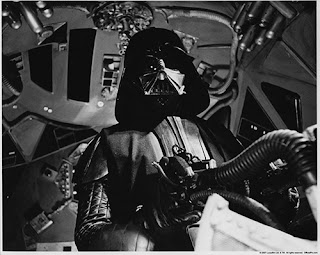 So, I have the ships and I've chosen my [Dark] side.  Now I just to have to play a decent sized game with the full set of rules and see how it goes.  That will happen soon enough as I take on another player at my local games club.  We've decided to run a 100 point game and he's taking 3 Rebel ships:
The Falcon is a tough ship to take down.  It has 5 shields and 8 hull points so, barring a critical hit that destroys it instantly, it's going to take a lot to put down.  Chewie has a unique ability that means if he's dealt a face-up damage card then he can turn it over without resolving it's ability and Veteran Instincts increases his pilot skill by 2.  Even the X-Wings are no slouches with 2 shields and 3 hull points.  It's going to be a tough ask to take them down.  Even tougher when I have no idea what I'm doing.  I did a quick search of the Internet, read a few forums and decided that I would take a Tie Swarm.  As far as I understand it, they can be a bit cheesy and they're tough to play against but, for me, it sums up the struggle between the 2 forces - the seemingly limitless forces of the Empire swarming the lesser ranks of the Rebel Alliance.  It also means I can take Vader so win/win.  My squad at the moment is looking like this: 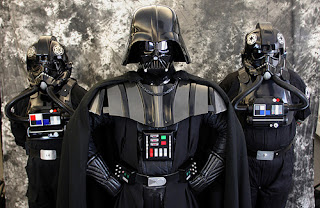 "Several fighters have broken off from the main group.  Come with me!"

Vaders pilot skill of 9 and Howlrunner's skill of 8 is very important.  They'll both get to move last, after they've seen what everyone else has done, and shoot first - Luke also has a skill of 8 and Chewie, with his upgrade, will be at 9 but as our points are equal, I, as the Imperial player, get the initiative.  More importantly, the Swarm Tactics on each pilot means that any friendly ship within range 1 of them can operate at the same pilot skill.  That could prove decisive if I get a bit of luck and get a ship in my sights early on then the whole swarm can unleash their fire at once.  Those X-Wings might not last long under such sustained fire.  That's the plan anyway.  I have considered taking Slave 1 piloted by Bobba Fett as that is also an awesome ship but it means I'll have to drop Vader.  I'm not sure I could do it.  Who wants to be the one tell the Dark Lord of the Sith that he has to sit this one out? not me.

I don't know if my plan will work or not but I'll have fun trying.  The power of the Dark Side is strong so, with a bit of luck, I'll crush the rebel scum.  I'll post a report once battle has finished.  Meanwhile: 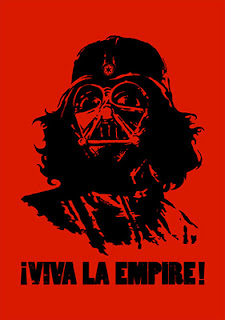