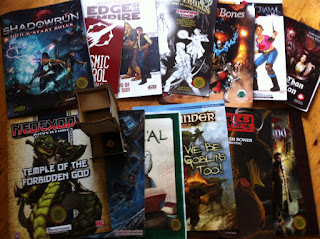 Last month we had Free RPG Day, the little brother to Free Comic Book Day. My Friendly Local Game Store, Dave’s Comics, kept one of everything aside for me. I thought I’d review each one, with an eye to how they look, read, ease of use from scratch and if they’re available online in case any of you like the sound of them. As far as the accessibility, pretty much all of these games assume that you have dice, and if you don’t have dice, there’s about a billion dice rolling apps these days, so that won’t be a factor when I look at it, just because it’s present in every game.

I will warn you, there are a LOT of game books, so I’m splitting this article into three. 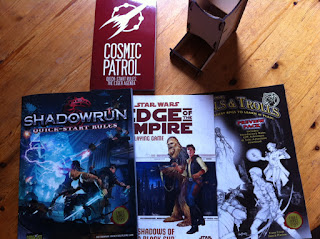 BLUE PANTHER LLC - KNOCKDOWN DICE TOWER VALUE EDITION
A small wooden tower to roll your dice through. It’s a really simple little device given away in a sheet of board that smells like my old DT classes. You press out the pieces of wood and slide them in together.
Does it look good?: Not really, it’s wood, cut together in a kind of basic way, but it’s kind of cute. The absolute best thing would be to paint it, then it could look amazing. Maybe I should pester one of the many painters here…
Does it read well?: Umm… I can see a flaw in this format. The instructions use pretty poor looking photos to show you how to put the tower together. Luckily it’s a really simple tower to build so you hardly need them.
How accessible is it?: Fairly accessible, you simply drop a dice through the top and it rattles through. It also shields the dice from flying across the table with a neat tray effect on the bottom. I think I might be able to condition my gaming group to fear the rattle of the dice through the tower’s wooden insides…

CATALYST GAME LABS - BATTLETECH/SHADOWRUN QUICKSTART FLIPBOOK
A combination of two classic games which have seen revamps in previous years.
Does it look good?: The covers look nice and the larger images of Shadowrun look nice even if most are recycled. Battletech doesn’t look as good with smaller images and a shocking lack of mechs. I’m not someone who knows a lot about Battletech, but I know there are mechs.
Does it read well?: Both quickstarts are mainly rules instructions with very little setting. Shadowrun is more interesting, mainly as it has to deliver information about the basic rules, the combat system, magic system and (to a lesser extent) hacking system. All three are given presence and that alone helps to dictate the feel of the game. Battletech’s system could really be for any game and doesn’t tell me much outside of there are mechs which my character can’t pilot as this isn’t the miniatures game.
How accessible is it?: Dice aside, pregenerated characters and adventures are in the book. There are even cheat sheets in the middle pages to remind you of the system’s basics, something core RPGs don’t do enough, let alone quickstart versions. The Battletech adventure is a quick chase and fight with some fun little extras, but again, it could be anything with soldiers and guns. Shadowrun is a fight in a fast food restaurant with orcs, shamans and cyberwear. There’s a food poisoning table and a menu of awful-sounding fast food. I love that kind of flavour. Not the fast food flavour, the setting flavour.
The Battletech RPG quick start rules are found here.
The Shadowrun RPG Fourth Edition quick start rules are found here.

CATALYST GAME LABS - COSMIC PATROL QUICKSTART
A second game from Catalyst Game Labs, this is a lot more ‘indie’ than the other offerings. A tiny booklet with science fiction adventures based on old school sci-fi dramas. That means dashing pilots in rocket ships and fighting Moon Men. Each character's core stat has a dice type you roll to pass a test, along with a d12. The Lead Narrator then uses a d20 to fight back. It’s simple, but then you also have character cues and plot points. This seems a lot like the Fate system, but then you also throw in a rotating narrator. Each scene change in the game also swaps which person narrates the action. Their character is still used but goes last so that the other players react to the drama first. Plot points are given for doing awesome acting and spent to add something like a friendly space-pirate or a self destruct sequence.
Does it look good?: It’s tiny and simple, with minimal art but yes, it looks good in its own quirky way. It’s under-produced in a way which works.
Does it read well?: There are a couple of concepts which need expanding on, but I imagine the full game will cover non-standard elements like cues and the rotating narrator better. It covers a lot of ground in 24 pages.
How accessible is it?: There are four adventures and three pregenerated characters. The maximum of three players isn’t great, but enterprising gamers can probably work backwards from the existing characters to make their own heroes. Or they could just buy the game, I guess.
The Cosmic Patrol rules and blank character sheets are all found here.

FANTASY FLIGHT GAMES - STAR WARS EDGE OF THE EMPIRE: SHADOWS OF A BLACK SUN
The new RPG from Fantasy Flight Games explores the seedier side of the Star Wars universe, where every place is a den of scum and villainy. Star Wars as a concept is dead to me, but this booklet is part rules, mostly adventure and setting.
Does it look good?: If you’ve heard of Fantasy Flight Games, you’ll know this is a stupid question. Everything Fantasy Flight makes looks gorgeous, even in the Star Wars universe. I sighed with disappointment at the existence of prequel-era aliens like one of the Dexter Jetster race, but it was still well-painted. I know I didn’t spell his name correctly. I also don’t care.
Does it read well?: Mostly. The adventure covers a lot of ground and would probably be best over a few sessions. There is one huge problem with this game and it’s the unique dice. Each dice in this game is from a set with specific faces, illustrated by little dice icons and result icons. It’s a level of translation which I don’t like, especially given that if you have this demo, then you have to use a table to roll a dice and cross-reference for results. The good news is that there’s an app, but it does cost £2.99, so if you’re in the spirit of Free RPG Day, you’re probably just going to use the table. That aside, I love the idea of the adventure, it starts with a flying car chase and features elements like side quests and a gambling side-game. We get a short look at mechanics like the destiny points which flip over between light and dark side to keep a kind of balance.
How accessible is it?: It’s lovely. The rules don’t take up a vast amount of space, covering the strange dice mechanics and some combat, but not to a point where it’s just a book about how to fight. I’ve been away from Star Wars since certain films happened, and didn’t feel alienated by the setting.
Alas, the adventure and quick play rules aren’t available at this time, but you can ogle the character sheets at Fantasy Flight’s site here.

FLYING BUFFALO - DELUXE TUNNELS & TROLLS PREVIEW: THE CHAMBERS OF Z’TPOZZ THE MAD DWARF
This booklet is the first of many ‘retro clones’ presented in Free RPG Day. I was concerned that as a ‘preview’ it would just be a few sample pages of a rulebook with nothing to connect them. There are several omissions for the sake of space, but there are enough rules to explain how to play a basic game of Deluxe Tunnels & Trolls, as well as an adventure.
Does it look good?: Not really, but the cover is a sketch preview of the finished art and the work inside is… well, it looks like 1st edition Dungeons & Dragons. Intentionally. There are a couple of nice pictures of objects, but when it comes to people, the art is as patchy as early roleplaying games.
Does it read well?: Not at all. Elements of the system look similar to early D&D books, but Deluxe Tunnels & Trolls has its own system which is quite different. There seems to be a lot of unnecessary complexity which is hopefully due to the main book not being finished at the time of this preview. Some of the problems look like they could simply be not communicating concepts effectively. The basic combat example has eleven bullet points for a single attack, two of which have their own bullet-pointed list on top of that. Codes for rolls like “L2SR on LK” are thrown around. The Monster Rating system and Saving Rolls have coding which becomes more fiddly than anything else. Experience Points/Adventure Points are synonymous, hopefully by accident.
How accessible is it?: This is exactly the kind of product I’d hide from people new to roleplaying, possibly even by creating a fake name similar to “The Chambers of Z’Tpozz the Mad Dwarf”. It can play out of the book, but I wouldn’t recommend it.
While you can’t get a pdf of the preview rules, they are simply preview rules. The Deluxe Tunnels and Trolls website is here, and it suggests that you e-mail Rick Loomis at rick@flyingbuffalo.com for a free solo adventure.

Finally, here's a better look at that dice tower. 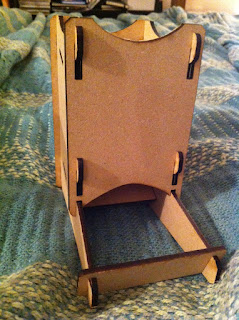