So, about the harlequins, well i undercoated them...in fact i undercoated everything. But then the tanks caught my eye, they were taking up so much room in the boxes and i really fancied painting something that wasn't 28 mm tall.


I had 1 fire prism and 1 wave serpent to paint. My basic plan was to using the stippling effect in a big way all over the main chassis. then do specific panels yellow to tie them in with my main force. The weapons i would paint with a bone colour much as i did with the ranger's rifles. 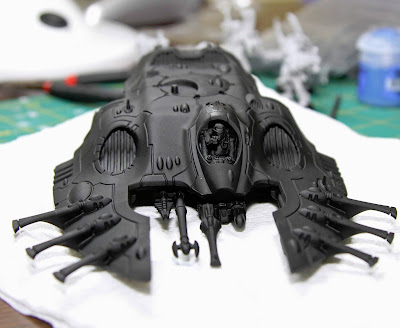 Starting from black i used Macragge Blue and a large dry brush, i removed almost as much paint as I would for dry brushing and essentially stabbed at the tank all over.

I then repeated the procedure with Alaitoc Blue but I was much more sparing with the amount i was putting on. I then used the same method as i did for my Pathfinders for the patches I wanted as yellow and worked through Celestra Grey to Ulthuan Grey before washing them with casandora yellow wash. 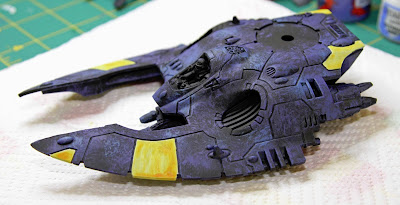 Id magnetised the options on the Fire prism so if i wanted i could use the Nightspinner option as well, the gun for the Fire Prism was stippled in the same way and then i applied several layers of casandora yellow wash to the clear plastic which i think gave a nice effect to the gun.

Several thin layers of Flash Gitz Yellow were applied to the washed areas and then i used a thin layer of Ushabti Bone on the vents to break up the blue on the hull. 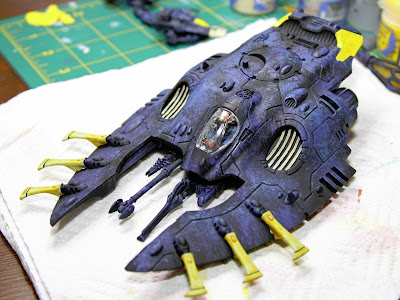 Finally i attached the plastic canopies.....i made a mistake here, one i wont make again, i used superglue to attach them which of course caused condensation to form on the inside and cloud up the canopy, all my work painting the pilot and gunners was kind of wasted as you could barely see them any more. I guess they're now sitting behind frosted glass. 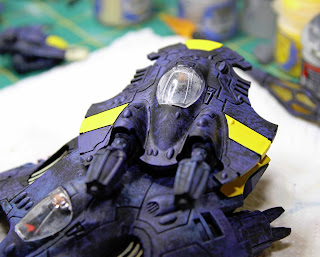 I just have a few finishing touches for these to be finished so at the start of the next part I'll show you all the finished tanks but I'm very happy with the effect the stippling has and I'll be using it again on other vehicles I'm sure.

Next I'm still going to be avoiding the harlequins and starting on some Dire avengers and maybe some Warp spiders.

As per usual, thoughts, comments, criticism is welcomed.
Posted by Simian at 10:00