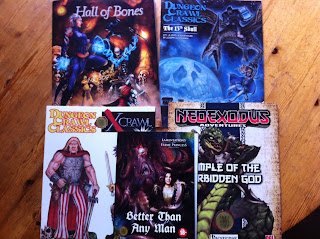 It’s been a little while. I’ve been busy and easily distracted, but I’m here now, with more reviews of RPG releases from this year’s Free RPG Day
In part one of the Free RPG Day reviews, I looked at the first five products in my bulging pile of free games. There was a fun dice tower to play with, an interesting adventure in the free Shadowrun rules, a really fun looking little sci-fi game, a beautiful Star Wars RPG and an ugly mess of a retro-style RPG.
This time I’m looking at the middle five of the selection of free games, which is proving to be a retro-clone-fest.


FROG GOD GAMES - SWORDS & WIZARDRY: HALL OF BONES
Another retro-clone, this adventure is for the Swords & Wizardry system which is free at the Frog God website which is a nice touch. It means that the rules are briefly touched on in the book, along with an adventure and premade characters, but you can go online, download the rules and make your own characters anyway. Having not heard of Swords & Wizardry before, linking to your free game from this booklet is a nice touch for getting your voice heard. The rules system looks exactly like first edition D&D from the brief look here. Taking up more space in the book is a primer on old school gaming. It’s… It’s a rant, a long rant which feels alienating to someone who’s not really been there. A lot of talk in the primer is about what a roleplaying game should and shouldn’t do. Rather than set the tone of the game, it feels judgemental and bitter. There are a couple of points I agree with, but don’t tell us why other games are bad, tell us why you are good.
Does it look good?: The maps in the centre of the book are fairly standard and the art for the premade characters are nice. There’s not much art aside from those pieces, just monsters and special items.
Does it read well?: Aside from the bitter ranting in the primer, there are a few times in the adventure where the writer breaks off and talks to the reader about nostalgic jokes. As a GM, I’m fine with the rules and setting fluff taking a casual tone, but adventures should be all business.
How accessible is it?: You will need to use the downloadable rules if you want to do anything complex, but basic actions can be handled with what information is in the book
You can buy this module here for $4.99 as a pdf or $8.99 as a print copy.

GOODMAN GAMES - DUNGEON CRAWL CLASSICS: THE 13TH SKULL
The series of “Dungeon Crawl Classics” adventures have been going for years, using the Open Game License (OGL) to bring old-school adventures which are compatible with any d20 System or OGL games. The system presented in this adventure looks like it’s DCC’s own since the last time I read it, although the statistics in this book could translate fairly easily into d20, which I assume was intentional. There are no rules with this adventure and no visible free preview rules on their site. The adventure is a short dungeon bash where the players try to rescue a princess. A lot of the ideas capture the old-school tone but don’t appear to muddy the system to capture the era’s style.
Does it look good?: The art is sketchy and rough. Like my look at Deluxe Tunnels & Trolls, my guess is that this is the intended effect. Unfortunately it makes the better art look unfinished and the worse art painful to the eyes. The map is really interesting-looking. It keeps the sketchy appearance and is initially confusing but I like its style.
Does it read well?: Compared to the other retro games it keeps things legible. There are little pieces of advice for things to prepare like index cards with rumours on. I like the table for a chaotic changeling which could have at any one time the head of a goat, legs of an ostrich, body of a bear and tail of a peacock. Now there’s a fun enemy. Personally, I don’t like dungeon crawls, but it reads nicely, with the ideas of old school games but little clunk.
How accessible is it?: You can’t play it just with the book. You need the DCC RPG, which I haven’t found demo rules for. I do believe you could use Pathfinder or D&D 3.5 to run it with little bother.
You can buy the PDF of this module for $9.99 here.

GOODMAN GAMES - DUNGEON CRAWL CLASSICS: THE IMPERISHABLE SORCERESS/XCRAWL: THE 2013 STUDIO CITY XCRAWL
This module, also from Goodman Games, presents a short adventure for both DCC and Xcrawl (powered by Pathfinder). The Imperishable Sorceress finds an ancestor of the players haunting the group, a strange race of insectoid ‘Builders’ and false people. XCrawl is an adventure using Pathfinder as a rules-placeholder until the Maximum XCrawl rulebook comes out. Think Running Man meets Dungeons & Dragons. In a grim & gritty future, all the high fantasy tropes exist and go through lethal dungeons for money. There are a few interesting ideas like people to ‘tag’ for bonuses, a time-out area where you’re safe but disqualified, rival teams and a green room as the starting area.
Does it look good?: Much like The 13th Skull, the Dungeon Crawl Classics art is sketchy but the map is impressive (and more legible than the 13th Skull map). Xcrawl is similar, and as a preview look at the setting, maybe there should have been more images to help get the audience in the mindset for the world.
Does it read well?: Yes. With little space for two adventures, each room is interesting compared to the classic, “this room has a 50% chance of containing 1d4 kobolds”.
How accessible is it?: Like The 13th Skull, either the Dungeon Crawl Classics core rules or OGL would be useful for the first adventure. Pathfinder is needed for Xcrawl and has its own free rules online.
You can download the characters for this module here, but not the module itself.

LAMENTATIONS OF THE FLAME PRINCESS: BETTER THAN ANY MAN
An adventure reportedly for old school gamers who like their worlds grim, dark and deadly. A cadre of seven magical women and their strange demons have taken over a town. They took away the weapons, cast out the military and the church. A Swiss army are coming to take the land back and probably wipe everything out. The adventure isn’t necessarily about stopping or supporting that, but presents a rich land of adventure until the army comes.
Does it look good?: The book is smaller than the other releases with a woman and her pet tentacled thing on the cover. The cover has colour maps on the inside and is loose so you don’t need to pluck staples out. This is good and bad as I’ve almost lost the cover to the book a few times. Inside the book is dense with an easy layout to navigate and several maps. This does not look like a free product.
Does it read well?: Not really. Not whenever the author inserts themselves into the narration. It starts by telling you about how it aims to alienate and offend. That put me off it right away. The thing is, it’s really good sometimes, when it’s not trying to be controversial. There’s a brief look at the overall events, the descriptions of these seven magical women and their beasts, then a location guide with plot hooks, a rumour table with more hooks, a random encounter table with yet more and so on. It’s filled with so many interesting little places to go and events to have. The way the random encounters are described is far more interesting than the “you find 1d4 kobolds”. But then there’s a lack of direction in this open world, despite all these goodies to play with. It’s ripe for stealing hooks from, but might be a struggle to run on its own.
How accessible is it?: The book makes itself clear on page one that it’s not here to give you a basic system, an introduction to the world or help with pretty much anything. There are scenes which might drive people away, such as having to perform specific sexual acts to each other or randoms in return for one of the Seven to give hints which feels a bit unnecessary and out there to shock.
Lamentations of the Flame Princess: Better Than Any Man may have even been banned in some stores during Free RPG Day, but it’s available to one and all here on a 'pay what you want' basis. The RPG’s core rules are able to be downloaded for free at the Lamentations of the Fire Princess website.

LOUIS PORTER JR DESIGN - TEMPLE OF THE FORBIDDEN GOD
A mage summons the players to help a savage giant ape-like race who have found the body of one of their kind having drifted down from a forbidden territory. The adventurers must brave this strange land and the many random tables of encounters it provides in order to enter a dungeon like all those which d20 players have faced since the system started. This time however, it’s because of the threat of a god they likely will not know about unless they’re already invested in this setting.
Does it look good?: The cover looks nice. In looking for links and free PDFs for each game on this list, I saw that there are a lot of covers with this similar design in the “Neoexodus” line. It’s stylistic enough to know what it’s about from the art. There are only a handful of pieces of art inside, some uninteresting maps and an awesome picture of a drow riding a giant tiger-looking thing (not featured in the game).
Does it read well?: Not really. It’s pretty much every single d20 System game since D&D Third Edition came out. Part of this is due to trying to tell a whole adventure in 16 pages. There is a primer to the setting which is 100% necessary for understanding the motivations of the player characters, but the players are unlikely to see this or care. The middle is mostly a selection of tables referring to the main Pathfinder books and a few stat blocks which are included, then the dungeon at the end feels just like any dungeon but with an ‘Aztec jungle’ reskinning.
How accessible is it?: If you know d20 games, then it’s really easy to understand. I forgot how awful these kinds of short adventures looked as I’d given up on d20 about eight years ago.
There is a free prelude to this adventure available here. I have not been able to find the free copy of this adventure. It might become available in the future or be really well hidden. If you can find them, please post a link in the comments. The setting information can be found for free here, and here.

Next time we visit more retro clones, one of my favourite authors and a conclusion about which of these games I’ll run, which will be mined for information, which I’ll keep just to read and which will be burned (or tactfully hidden in my increasing eBay pile and forgotten about).
Posted by Charlie E/N at 08:00