You remind me of the Babe...Jim Henson's Labyrinth (2016) board game review

Jim Henson's Labyrinth was a big film for me as a child One I'd always watch if it was on TV and a film I've owned on both VHS, DVD and BluRay. Its a film that I bonded with my fiancee over when we first started seeing each other. It has endured from childhood to adulthood as one of my favourite films. I also love board games so when I heard that there was to be a Labyrinth board game, with official Jim Henson Creature shop miniatures I was always going to buy it. Well I have it now, I have played it and I have also read a few unfavourable reviews on sites like Boardgamegeek. Are these fair? 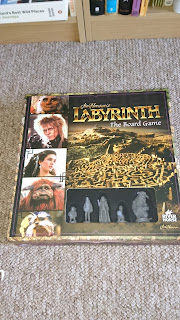 The game itself has lavish production values. The insert is lined with velvet. The miniatures are spectacular (I also got Conan at the same time and they are every bit as good as the miniatures in that beautiful game) the board art is WONDERFUL. The cards are less fancy that they could be but are perfectly acceptable with nice movie stills and nice clear instructions.


In the game the players play as one of four characters from the film, Sarah, Ludo, Sir Didymus and, of course, Hoggle. The game begins after Sarah has fallen into the Oubliette and you have 13 hours (rounds) to defeat Jareth in the Goblin City before baby Toby is forever turned into a goblin. The game itself plays out a little like classic Talisman. The characters randomly move around the Labyrinth (roll to move! shock horror) and have the option to team up as they meet which allows them to pool resources to overcome the various trials they meet using their various Speed, Brawn and Wit attributes (each represented by a different type of polyhedral die). At some point they will discover the door to the Goblin city at which point the party will battle various Goblin adversaries until Sarah alone tackles Jareth's maze and delivers the final spell to rescue her brother. 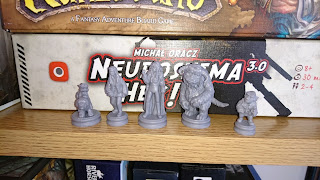 The game is clearly designed with families and megafans in mind. Its a simple game and is designed to be so. It is not overly long and it is engaging enough to hold your attention throughout. The trials are a little samey but sprinkled amongst them are some nice strategic choices that need to be made by the party, choices that mirror those from the film. I feel some people went into the game with the wrong attitude and are now complaining that is isn't something it was never going to be. The Talisman Lite (and what is wrong with that?) moniker has stuck in certain sections of the community. It wont be a game that hits the table regularly but for me it fulfills the brief perfectly. It faithfully recreates the film in a fun family board game. I had a great time playing with my fiancee and im already eagerly awaiting my daughter being old enough to enjoy it as well.

River Horse are currently working on an expansion which will add some more lovely new miniatures (Goblins this time) but hopefully a few more choices into the game which will of course improves its longevity. If you are not a fan of the film then firstly, what is wrong with you? but if you aren't then the game is unlikely to be your cup of tea. If you do enjoy the film, however, then this game will certainly give you a smile and is well worth checking out. If nothing else it forces you to sing the refrain from David Bowies classic 'Dance Magic Dance'. Altogether now...You remind me of the Babe..What Babe?

Four Fireys out of Five
Posted by James at 12:01