Back in January 2015, a time of high adventure, a game hit kickstarter that promised beautiful minis and an authentic representation of the world of Robert E Howards Conan the Cimmerian, backed up with a game that had some of the biggest names in boardgaming attached. That game was Conan by Monolith games. It went on to be one of the largest grossing tabletop game kickstarters and delivered last month some monumental boxes full to the brim with stuff, and things. But are these good things and fine stuff? The game is not without its controversies, more of which later, but more importantly, did it deliver on its promises? 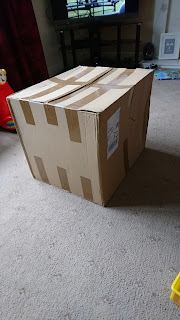 A big box of stuff


The first thing you notice is that the game is undeniably fancy. The miniatures are for the most part wonderful sculpts, easily the equal of wargames miniatures (remember this is ostensibly a board game) and although some concern was raised over the different materials used for the heroes (which looked at first like bendy Reaper Bones style plastic) and the Overlords minions I can confirm that both types of miniatures paint up very well. The game boards are beautifully illustrated, trumping that seen in other such miniature games. The cards are nice and clear, good art backed up with a nice functional graphic design. Good dice, all in all a class act.

All that would be for naught if the game was poor. And here is where I think Conan will triumph. You can almost hear the lamentation of its competitors women as you browse the (admittedly confusingly written) rulebook(s). Yes this game has spread its rules over a Players and Overlords rulebook, RPG style. This has been another gripe for certain people and it does mean that there is a fair bit of cross referencing required, but for me its a minor complaint. It really isn't that big a deal.  The rules themselves evoke the kinetic and high octane world of Conan's particular brand of Sword and Sorcery action, underpinned by an ingenious resource management system that give an almost Euro style vibe to proceedings. This mechanic gives real weight to the game and ensures that every action needs to be considered whilst allowing a cinematic play style befitting the source material. The game also does away with strict turn order amongst players, allowing for true co-operation and team work.

One versus many games can often suffer from it being not as much fun to play the one (unless you are a particularly evil so and so) but Conan makes it possibly MORE fun to play as the Overlord by giving you a funky mechanism all of your own. Not only are you balancing resource gems like the heroes but you are juggling your various minions on a player board 'river' where units can be activated more than once but each time they are more expensive to do so, adding real tactical depth to the game. 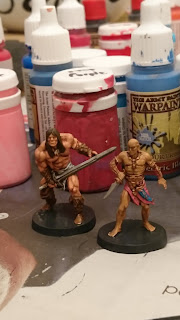 The Man himself, and friend

It is no wonder that the game mechanics are so tight and considered when you see the names attached to the game. Bruno Cathala (Mr Jack, Cyclades, Shadows over Camelot, Five Tribes) , Ludovic Maublanc (Cash and Guns, Cyclades, Terror in Meeple City), Croc (Claustrophobia, Hell Dorado) and Frederic Henry (The Adventurers) amongst others. Three planned expansions will add new scenarios and adversaries to meet along with new game boards to fight over.

Now to the controversies. Robert E Howard was writing these stories in the 1930s. Like his contemporary and fellow 'Wierd fiction' writer HR Lovecraft his views to do with issues of Race and Gender were not progressive for the time and reflect some of the worst aspects of the era, which lets not forget was the high water mark period of Colonialism but was a period that was also seeing the opening up of the world and the death throes of the old regimes politically and socially. Women's liberation movements were gaining traction and the old order (western, white, male) were still fighting back against the new world. By the end of the decade the world would be awash with blood as these old concepts came tumbling down through war and revolution. By trying to stay true to Howard's original writing some of these old attitudes shine through. Foremost amongst this is the portrayal of women in the game, and in particular how they are portrayed on the board. Belit is basically nude, and the few other female characters available to use are in various states of undress. Given that Monolith have side stepped some of the issues of race (making the Picts more troglodyte in appearance than the Native American allusion in the text, ignoring the anti-Semitic Shem etc) it seems strange they didn't maybe even up the huge disparity in male to female representation, or at least dress the female characters in slightly more practical attire. BUT I think its up to the individual how much of an issue this is for them. For me, personally I can live with it. Belit and Valeria are strong independent women, leaders of men and equally as kick ass as any of their male equivalents. Id have preferred them to wear more appropriate clothes to fight in (Valeria is nearly there but seems to have accidentally slashed her trousers high up the thigh and tied her shirt around her belly button) but I can deal with them without my personal views on women being influenced, just as I can deal with the bodices and exposed flesh that is common in most fantasy games. One day these representations will be less prevalent in the genre and I will play those games happily as well. 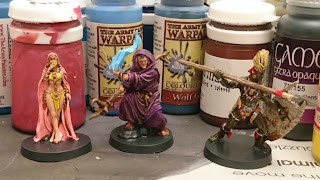 More of his mates and a Princess...who will catch her death