A dice-risking game about eating the most brains, for two or more people. 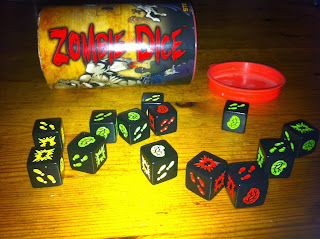 Zombies are pretty much over as a thing now, right? The zeitgeist peaked a few years ago and now a game with zombies in have to be pretty damn good to get anyone’s attention. Last Night on Earth is thematically interesting but really imbalanced and not towards any particular side. Zombies!!! is a good occupier of time but not a very good game. Zombie Dice is thematically very light, but that might be its saving grace.
In Zombie Dice each player is a zombie trying to chase survivors who are represented by six-sided dice. The first one to munch on thirteen brains is the winner. Although really you’re all zombies, so you kind of lost at life already. It’s still a win in their books, I guess. It’s also a good time to practice your zombie noises, which I’m sure will be essential in the Unlikely But Inevitable Zombie Apocalypse.

The contents of Zombie Dice are thirteen six-sided dice, a rules booklet and the short cardboard pot they’re all contained in. Compared to board and card games it sticks out from the collection, but don’t throw away the pot, it’s necessary.
Each turn the active player shakes the tube and blindly draws three dice, they roll them and separate the results into brains, feet or shotgun blasts. You roll again, taking any feet dice you have and adding more from the pot to make three dice. If you choose to stop, you score every brain dice you’ve rolled so far. The thing is, get a total of three shotgun blasts and every brain you’ve rolled so far is gone, your turn is over and you score nothing.

So far so simple, but why the blind-drawing from the tub? Well, there are three colours of dice in the pot; red, yellow and green. The red dice have more shotgun blasts and green have more brains. The yellow are pretty average. This helps you predict what’s left in the pot to draw from.
As example turn goes as such:
You draw three dice from the pot, two red and a yellow dice. Damn. You roll them and get a single kablam on a red dice, and feet on the red and yellow. You scored nothing, so you may as well roll again because you’ve got nothing to lose. The red and yellow dice with the feet on have one more added from the pot. It’s green! You roll all three and get three brains! It’s not likely, but not impossible. With one shotgun blast and three brains, you decide that you’ve got most of the bad dice out of the way, why not roll another? But should you? The smart decision might be to bank the points and walk safely away with your three points, but your in last place so you let ambition get ahead of you. Two of the dice need to show up as shotgun blasts this time, so the odds may be in your favour if you draw well. There are five more green dice in the pot after all. What do you do? It’s a tough call. When I was in this position I drew a red and two yellows. Three shotgun blasts and all my points for the round were rendered worthless.

This is a very fast and simple game, but the use of risk and reward can make things tense as people eye up the pot, hoping they made the right choice and fate smiles on them. It’s also loud. Sure the people are loud but that might be group-specific with brain-eating noises and yells of excitement or disappointment with the dice rolls, but I mean the actual game. The dice clatter loudly in the pot, satisfying unless you’re a nearby family dog or a person who’s not joining in. I think the noise actually helps get people animated. I still remember the game designer saying to me that rolling dice = fun, so rolling more dice = more fun. Hence Zombie Dice, I guess.

Zombie Dice is so thematically light that you don’t need to give a toss about zombies to enjoy yourself with the game. I view this as a great gateway game for people who aren’t used to mechanically heavier games. It’s also a good start for an evening of gaming to get people in the dice-rolling mood, all excitable and ready for when the other players turn up.